What is a Chemical Engineer? University of Pittsburgh’s Department of Chemistry and Petroleum 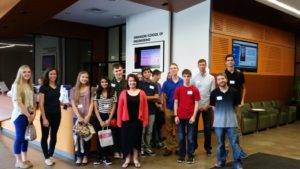 On Monday, June 13, 2016, we began our STEM Careers Tour with a visit to University of Pittsburgh’s Department of Chemistry and Petroleum. Students gathered in a conference room for a brief introductory presentation. While we ate our lunch, four graduate students studying chemical engineering described what a chemical engineer is, and how they differ from a chemist. There are a few main differences between the two occupations: novelty, scale, and sample size. 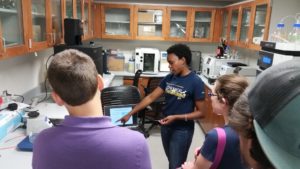 Novelty of products is the first difference. A chemist will use more original thinking to create a new product from scratch, while a chemical engineer refines a product to make it more efficient and consumer friendly. Another disparity between the two is the scale of production. Chemical engineers work on a large scale, like a factory. On the other hand, chemists work on a much smaller scale. This ties into the last difference, sample size. While chemists work with only a few grams, chemical engineers work with tons. After learning the basics, the students were shown the broad range of career opportunities available in chemical engineering and that in order to have the skills “to do cutting edge research,” you need an advanced degree. You “earn the right to think originally” once you’ve earned your Ph.D. 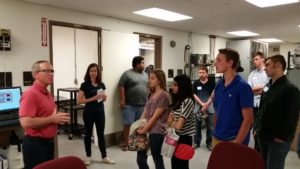 After the introduction, the students headed downstairs to the Unit Operations Lab. Here they were able to meet with a professor who described and performed demonstrations using the lab equipment. He invited students to help him perform experiments with his equipment. One machine showed the reactions taking place to produce soap. The display had line graphs showing whether it was exothermic  or endothermic, and if the reaction was at a steady state. The professor also explained that there are four important skills to succeed in industry: equipment, report writing, presentation, and working in groups. The Unit Operations Lab demonstrated how processes are started on a small scale so they can later be scaled up. 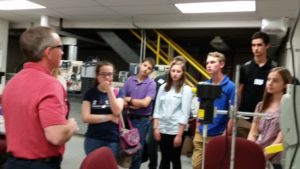 Once the tour of the Unit Operations Lab concluded, students split up into four groups to tour the Little Lab, Banerjee Lab, Veser Lab, and the 11th Floor Computational Labs. At the Little Lab, they often study Biomimetic strategies. The use of synthetic material helps imitate biological interactions and properties. The Little Lab also focuses on controlling deliveries for creating more efficient medicine. For example, instead of taking a pain killer that would send signals all over a person’s body, one could simply take medicine that targets a specific cell, providing more relief and efficiency.

In the Banerjee Lab, Dr. Banerjee and his students study STEM cells for treating diabetes. They are also working on revealing pathways that control the differences in cells to produce certain physical characteristics. In this lab, PCR machines were available to check gene expression and protein expression.

The Veser Lab had lots of equipment in it for its work with nanomaterials – including a scale and a machine that could detect the chemical makeup of a product. In the Computational Labs, where the hypothetical is modeled with computer simulations, the students met some of the college students and learned about what they were studying and researching.  One of the materials that the students had discovered was metal organic framework. When it is created, it forms unique and complicated structures. The students are finding ways to utilize this new material.

A short video made by some of the students in the department was also played. Using Blender, they were able to animate a video about how they proposed to solve the crisis of Greenhouse Gases. This animation explained that the excess carbon dioxide from the atmosphere should be captured and used for another purpose on Earth. Touring all the labs helped the students to experience what college research is like outside of the classroom.

The Department of Chemical and Petroleum Engineering has been around for a while, been established in 1910. The Department has access to exceptional classrooms and labs, with world-recognized education programs.