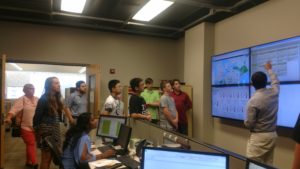 Creating green everlasting power to sustain our future. That is the main goal of EverPower in their quest to create safer and cleaner energy through wind power. The STEM Career Tour recently took a visit to the Pittsburgh office of Everpower to see how wind energy works and how it can be used as alternative energy. The students were amazed to see how much information was presented on the 6 screens that were constantly gaining data from active wind turbines all throughout the country. There was also an active weather report on one screen that is used to see where winds will be heading and see where lightning is currently striking. Lightning is very important to the workers of EverPower because they need to notify their field crews when lightning is within in the area so they can evacuate working on their turbines and find a safe place to wait until the storm has passed.

EverPower also went into details of how a wind turbine is made and how they work when they are running. It takes about 7 mph of wind to get a turbine started and the turbines will typically turn in the direction where there is most wind. The blades can also rotate to match the wind patterns and get more energy produced. The workers of EverPower also explained how even though it seems like they focus on a specific field of engineering, they also use principles and concepts from other types of engineering. They explained how there really is no field of engineering in the modern day that doesn’t need all types of engineering to make them work. This was particularly intriguing to the students, as it is beneficial to them as they are searching for a potential career and college major. We thank EverPower for taking time out of their days to welcome the STEM Career Tour and show us how alternative energy is being revolutionized through wind power.

A Trip to Google 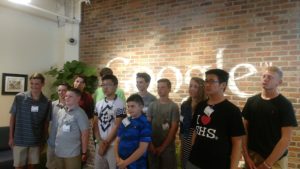 Okay Google, give me a tour of your facility. That’s exactly what students in the STEM Career Tour were saying as they got the chance to tour one of the biggest companies in the world, Google! STEM Career tours recently gave 12 students the chance to go and see the Google Pittsburgh office located in Bakery Square. There, they were greeted by representatives of Google who showed them around their entire facility. It was inspiring to see so many bright young minds light up as they walked through the offices of the people who make their favorite search engine a reality. The biggest eye catcher for the students was seeing all of the code that was being written by all of the software engineers. Seeing the amount of work and coding that goes into the Google search engine really caught the attention of the students. The students were also amazed at seeing the sheer amount of resources that are made available to every google employee that works at the office, and really enjoyed learning about the camps that Google run to help students get on a path towards a career in STEM and hopefully a job or internship with Google!

Later in the tour, the students got the chance to sit down and play through a game called “Code Combat” which is a game that teaches the beginning levels of coding as they play. This was a wonderful opportunity to give the students a chance to get familiar with what coding is like and what the software engineers at Google work with all day. We also had the pleasure of getting a Q&A with 4 of the members of the Google team. They all shared their stories of what it’s like working at Google and about their experiences working in a STEM field.

They also explained how they changed their career paths many times and they did a lot of trial and error to get to the point that they are in today. The process of trial and error is very similar to the coding process, as most of the time the code won’t work on their first try, and they must do trial and error to fix all of the bugs. This was particularly interesting to hear about and the students all were inspired by everything they saw and heard about. By the end of the tour, they all wanted to become software engineers! The students had a wonderful time and we thank Google for finding time in their days to welcome the STEM Career Tour!