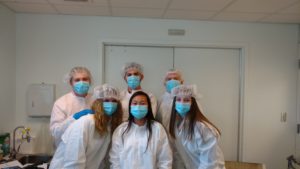 As part of the Cardinal Wuerl North Catholic STEM Career Tours, we took a trip to visit Noveome. Noveome is a company that specializes in biotherapeutic products. The people at Noveome were gracious enough to post an article about the trip we took to visit them. Written below is the article and here is a link to the article for sharing

When a group of high schools students walked into Noveome Biotherapeutics, Inc.’s offices and labs recently, many of them were wondering whether they might be looking at their own future. “This is a chance to experience things in case we truly want to go into that field,” said Noah, a senior at Cardinal Wuerl North Catholic High School. He was among the 15 students – 3 boys and 12 girls – who visited Noveome as part of an Advanced Placement Biology STEM career tour. A majority of these students said they were interested in pursuing college degrees in the sciences.

Having just learned about cell interaction, they were fascinated by Noveome’s research and product development involving paracrine signaling, the process by which human cells communicate with other nearby cells in order to keep them healthy and functioning properly. Noveome is developing ways to mimic paracrine signaling to re-establish that communication when it is impaired by injury or disease. “We make a product here that goes into human clinical trials,” explained Cathy Trumpower, Noveome’s Associate Director of Manufacturing. She told the students about two FDA-approved Phase 2 clinical trials Noveome is currently conducting for its product, known as ST266. One trial is testing ST266 as a potential treatment for periodontitis, while the other is testing it as a potential treatment for allergic conjunctivitis.

As the students came to understand, Noveome’s pioneering work centers on special cells and what they secrete when handled a particular way. “Here are 65 million cells,” Tyler Okel told a group of the students on the first stop of their tour. He was showing them a one-inch vial he had pulled from a freezer cooled by liquid nitrogen, which maintains the temperature at lower than minus 140o Celsius. Tyler explained how Noveome begins making its product by collecting a certain population of cells from placentas acquired after full-term, scheduled C-section births. These cells are collected at Noveome’s tissue processing facility in Clearwater, Florida, then stored and shipped to Pittsburgh in a cryogenic state. Each vial of cells is one of hundreds in a stack of boxes kept in the freezer. “We thaw about 10 vials at a time to put in our bioreactor,” he said.

Why this population of placenta-derived cells? As the students moved to another lab, Lead Biochemical Scientist Nathan Hazi explained. “Their job in the placenta is to bathe the fetus in all these different molecules to make it healthy and happy, and if there’s injury, to heal it as quickly as possible,” he said. “We’re taking those cells and culturing them under particular conditions to get them to make our product and to use that as a treatment for many different diseases and conditions.” As he spoke, Quality Control Analyst Kate Butler was giving the students a close-up view of cells in a culture flask using her digital microscope. “Do you see the medium on those cells, the liquid?” Nathan asked. “That’s what the cells use to grow. The medium becomes full of the molecules we want to use.” But culture flasks can produce only a limited amount of product, he said, “So, my job is to figure out how to make a lot of it.”

He took the students into the next room to show them a bioreactor. The one he pointed to is small, “baby size” as he described it, although down the road increased manufacturing will involve larger reactors. This one was equipped with ten plates inside to which cells attach themselves and grow as the liquid circulates through. The device was connected by tubes to several nearby tanks and by cables to a desktop computer. “Is that graph normal, with all those lines like that?” asked Kaylen, a 12th grader interested in becoming a Physician’s Assistant. She was looking at the computer screen. Nathan explained how the computer controlled the temperature, amount of oxygen, acidity levels, and other factors needed for optimal cell growth, and that the lines on the screen traced each level over time. “This point where they’re jumbled is where I changed the medium,” he said. “When I drain it out, that’s our product.”

The questions began to flow, not only from Kaylen, but also from fellow senior Rachel and juniors Bella and Bridget, all of who saw themselves working in health care. “How long does the process take?”, “How much product do you make?”, “If you were using that on a patient, how much of it would you need?”

One personal question came a few minutes later when the students had moved on to observe quality control procedures being undertaken by Kaysie Foust. She was using a multi-channel pipette to measure product samples for testing. “Do you ever get bored?” a student asked. No, Kaysie replied, saying the job of making sure the product is safe involves many different tasks. At the moment, she was checking the levels of different proteins in the product. At other times, she said she might look at cells for signs of contamination. Around the corner, co-worker Alberto Suarez was passing around plates he used to test for excessive amounts of bacteria. “Nothing dangerous,” he assured them.

Kaysie gave the students a challenge: use the multi-channel pipette to quickly transfer fluids. What appeared to be easy for a seasoned professional proved to be more cumbersome at first for those with less experience. This wasn’t the students’ first hands-on challenge of the day. Outside the Clean Room, Joe Brooker instructed them on the proper way of donning bio-suits and the delicate task of avoiding contamination – no touching with bare hands and no contact with the floor. “I already failed,” laughed Alex, a senior, as he and fellow students managed to suit up and pose for a round of selfies.

Throughout the tour, many questions concerned what each staff member had chosen as a major in college and the direction his or her career had taken since. The Noveome scientists, all of them young and bright, with a degree or two in various fields of biology or chemistry, encouraged the student scientists to get a good foundation in their studies and let the jobs that follow expand their abilities. “I didn’t go to college to learn how to culture cells. You gain the science and then you come to a job and get the skills you need,” Kaysie told them.

And what did the students learn during their tour that might affect their futures? “Here you get to see exactly what you might do,” said Noah, echoing his anticipation from earlier in the day. To which Kaylen added: “How it applies to real life situations, and how you’ll actually be helping people.”

Here is a slideshow with pictures from our exciting visit!